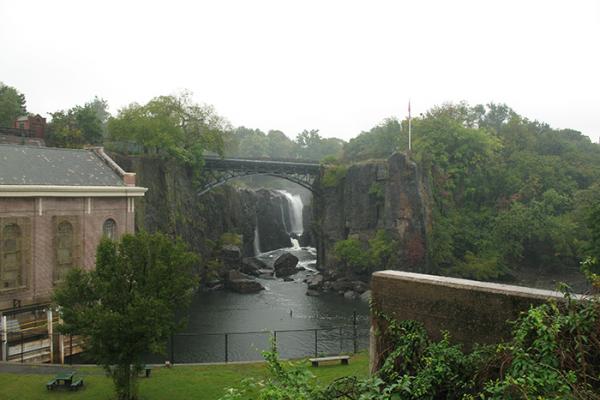 The Great Falls power station is a 10,950-kilowatt hydroelectric generating station located on the Passaic River in the city of Paterson, New Jersey. It is located at the base of Great Falls, the second-largest waterfall by volume east of the Mississippi River. The historic industrial district of Paterson surrounding the falls, which is a National Historical Park, dates back to 1792 under a plan developed by Alexander Hamilton to harness the power of the Passaic River for a new industrial economy.

The current hydroelectric powerhouse was completed in 1914 and operated with its original equipment until 1969. The facility’s current three vertical Kaplan turbine generators, installed in 1986, produce approximately 30 million kilowatt-hours of clean energy in a typical year. The facility operates under a license from the Federal Energy Regulatory Commission (FERC Project No. 2814) that is valid until 2021.

The City of Paterson, NJ and Great Falls Hydroelectric Company (a subsidiary of Eagle Creek Renewable Energy), as the current co-licensees of the project, have initiated the process to re-license the Great Falls facility. Please follow the relicensing link below.